(This feature is currently in active development. Please reach out if you want to become beta tester)

With all of analytics logic being described as code using AML, it is natural to be able to check them into a revision control system such as Git.

With Holistics's Git Integration, your Holistics codebase is now powered by Git. You can track every change, perform code branching, change reviews for a better analytics development workflow.

Behind the scene, Holistics maintains Git repositories to host the code changes. Holistics also exposes a Git-friendly UI interface for users to commit changes and deploy to production.

There are 3 different Git repository concepts with Git Integration:

You can either use Holistics' default repository, or connect to your own external Git repository:

With an external Git repository, you can choose between work on your local machine using a text editor of choice (i.e VS Code), and work on Holistics Cloud Editor:

From the user's perspective, the workflow follows a simple 3 steps:

Please refer to this document to learn more about the difference between the two modes.

To start making changes, you need to create a new branch (in Development mode). You are not allowed to make changes directly to Production environment.

When creating a new branch, you're asked to choose a base branch (aka branch to fork from). If your change is new, you should fork from master (production) branch. 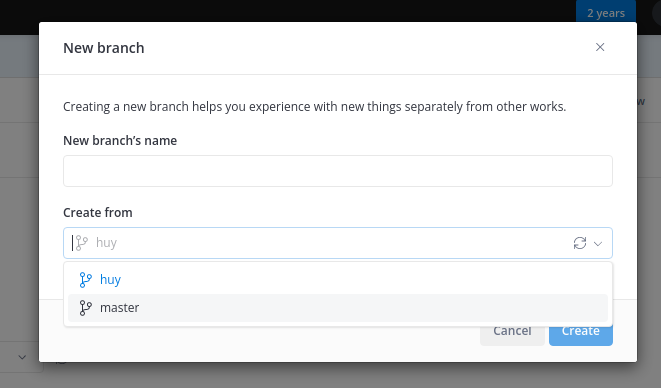 Notes before creating a new branch:

You can make as many commits as you want. Similar to software development, it's recommended that you break your changes into multiple atomic, meaningful commits instead of a big one. 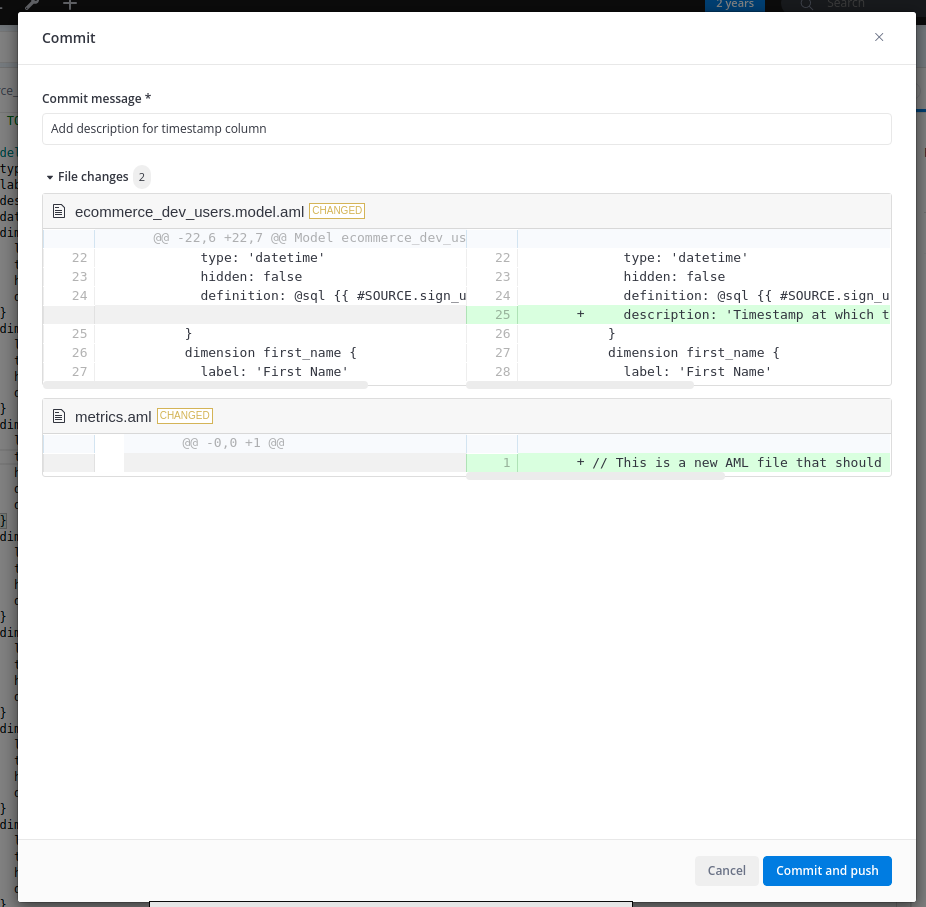 If there are branches that are no longer useful for development and you want to clean up them, you can delete them in branch management 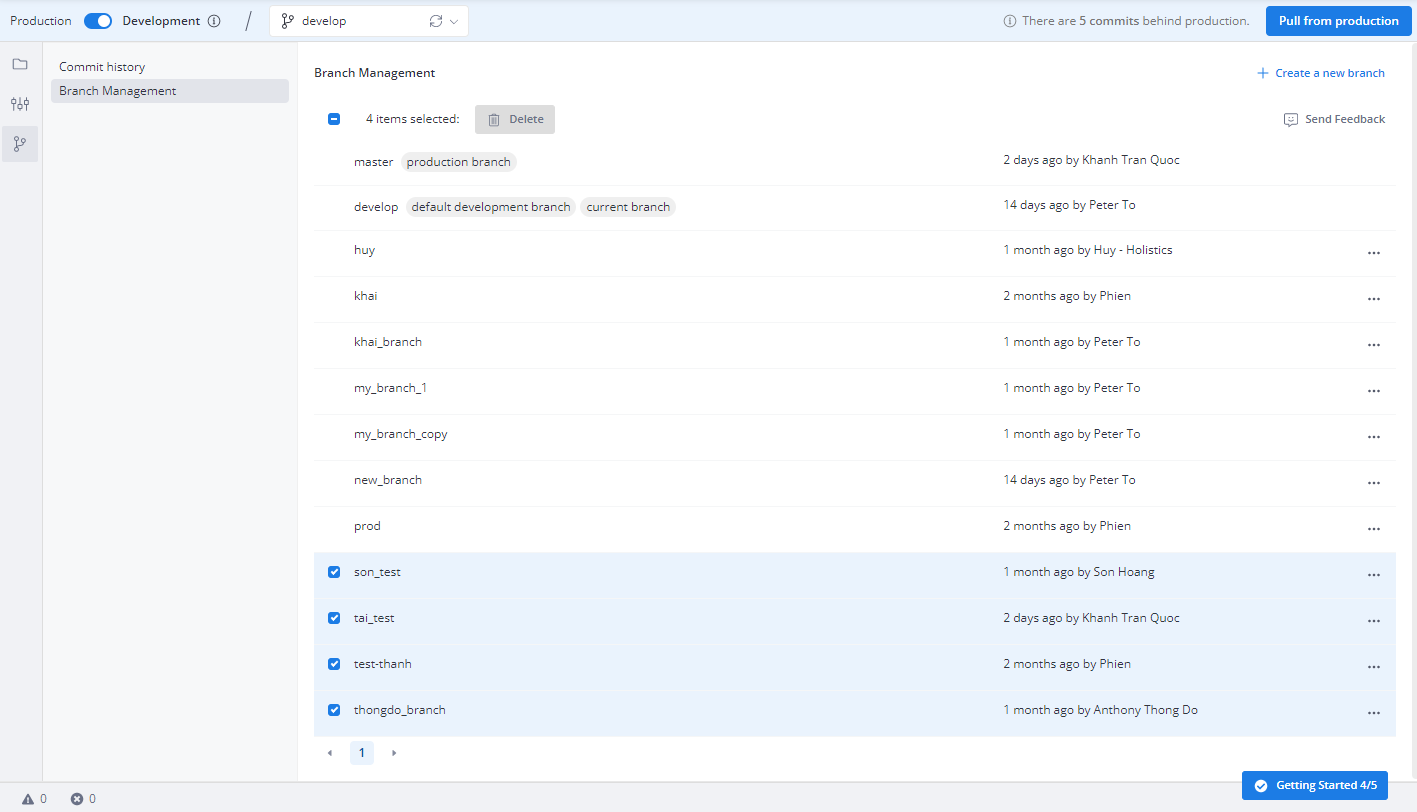 However, do note that even if you delete a branch, if that branch still exists in another repository of another user and he (or she) pushes it back to System repository, it will be once again presented to your branch list.

The reason for this is that you can only delete branches in your user repository and system repository, you will be unable to touch other people's repository.

When you are happy with your changes in your development branch, you can deploy them to production. Click on "Deploy to production" on top top right corner of the page.

In order to deploy to production, your current branch needs to be ahead of the Production branch. If not, you will be asked to Pull changes from Production before proceeding with the deployment.

A merge conflict arises when two Analysts make changes in the same line in a file, or one Analyst deletes a file but other Analyst makes edits in the same file.

When you pull changes from other branches, there is bound to be merge conflicts. Should this happen, Holistics will use the standard Git syntax conflict markers (Learn more) to display conflicts during merging.

The merge cannot be executed automatically since Git cannot determine what changes to keep so you will have to resolve the conflicts manually.

💡 This feature is not supported yet in the Beta version. It should be supported eventually when Git Integration comes out of Beta.

Holistics supports syncing from System repository into your own external Git repository stored in Github or Gitlab. The syncing will be two ways:

Using your own IDE editor: Once support for syncing with External Repository is released, you can use your own code editors (e.g VS Code) to do analytics development on your local environment, and deploy by simply pushing to System Repository.

Reverting to a previous version​

The following section is a workaround as Holistics 4.0 does not support revert feature natively. You should preferably have basic Git proficiency before following this guide.

To revert an AML project to a previous version, you will need to go through these steps:

Step 1: Pull the production branch from the remote host to your local machine​

Run Git pull command to pull the code from the production branch to your local machine.

Typically, you will have either master or main branch as your production branch.

Step 2: Revert the code to the desired version using Git​

First, check Git history to find the SHA-1 hash of the version you would like to revert. You can use Git log command to do this.

Then, you can use either Git revert or reset to revert the code.

What is the differences between git revert and git reset?

Below are the fundamental differences between the two commands:

Because of their differences, we would advise that:

Step 3: Push the reverted code back to the remote host​

You can use Git push to publish the changes to your remote production branch.

Step 4: In Holistics, pull the new code from the remote host​

To fetch the new code, click Pull changes from remote to sync the new code to your working repository.